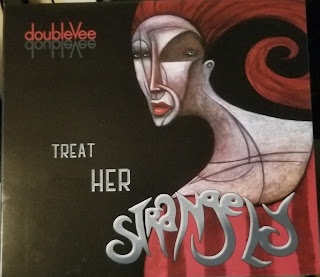 I like to joke about Bottle's Taxonomy of Music, but i'll just let you search through the posts at albumsforeternity.blogspot.com (it's real easy, just use the magnifying glass/search bar). The important thing for tonight's review is that track-2 cool-downs are terrible. You know who knows better? My penpals, the Vests, as doubleVee.

I have never met Barb and Allen, but they are both a part of the fabric of my existence through no actual fault of their own. Allen, of course, fronted one of my favorite bands in the universe, Starlight Mints. Apologies in advance for how long it will take to get to the actual album, but i figured story time is much more interesting than whatever convolutedly creative way i come up with to say "it's freakin' awesome."

My friend Stephen Hughes had an extra ticket to see Flaming Lips at whatever they called that building to the northeast of the minor league ballpark in Bricktown (Coca-Cola Colosseum, or who cares), and he invited me along. That's a no-brainer no matter who was opening, but it turned out to be Liz Phair and Starlight Mints in reverse order. I like Liz just fine, but i was holding Built On Squares and The Dream That Stuff Was Made Of in my hand probably less than 18 hours later. Fun Bottle Biography fact, that's right around the time Seether's Fine Again was a big radio hit, so i was making fun of that final held note out loud as much as possible.

Speaking of radio, i actually listened to Filmscapes on KCSC 90.1 from 1999 up until about 2003 when i moved to Norman, so now i can finally stop snapping so hard to try to remember where i know Barb from, because that's where.

Then, imagine my surprise when i finally got hold of a copy of Drowaton (which is definitely not a word backward) as i was living in Denton, TX, and saw Steven Stark playing cello in the liner notes. Him i don't need to snap for at all, we went to OCU together and i love that guy. At the risk of getting sidetracked by yet another unrelated anecdote, i bet even he didn't know that he's actually the source of the long running gag in my books about Sandra's eyebrows being a weapon. That story goes like this:

So, my dad died in September 2019, and Steven and I went out for coffee and a chat the day before the funeral. I am fastidiously ridiculously early for everything, so i was just sitting in the parking lot when an obvious pot head asked if i could drive him around the block to look for his friend with a yellow backpack. Me being me, yes i totally let that wacked out insaniac get in my car and i drove him around the block a couple times. He asked what i did for a living and i said "i'm a musician. You?" He replied "i'm a motivational speaker," so i in turn turned back into the parking lot and said "motivate your ass out of my car because i'm meeting a friend for coffee." I bet right now you're making exactly the same face Steven did when i told him that story and pointed to the actual guy sitting in an adjacent room. Whence the eyebrow gag. Don't worry, he didn't stab or rob me or anything, at least not enough for me to notice anyway. I thought the whole thing was hilarious because i've had congenial conversations with way more terrifying drug dealers/users in way worse cities than Oklahoma has to offer, but i don't necessarily recommend that level of reality immersion for everyone. I'll inverse LeVar Burton that one and let you take my word for it.

What does any of that have to do with treating her strangely? More apropos, what the hell was i talking about? Oh yeah, track 2 cool downs. I don't like 'em. I much prefer a couple strong lead-off tracks followed by a total face slap. Treat Her Strangely delivers. You are not prepared for the The Middle Side Of Me, and they don't telegraph it in the slightest. Then they carry on the Baroque Pop influence into the rocker No More Nickles And Dimes. Chefs kiss, it's magnifique. We'll skip over the inner tracks (but not because they aren't equally awesome, because they most definitely are) to land on the gorgeous dark chaos of almost barroom piano on We'll Meet Again. That track has some real Noir and i'm all about it. And we end with Barb's lead on The Question's Closed. It's total Dexie's Midnight Runners in a Post-Punk meets Monkees kind of way. No, i'm not joking, that is 100% accurate. It is Come On Eileen, Another Pleasant Valley Sunday, and something just beyond that synapse that i'll reignite 3 days from now all smashed together, and i want that to be an entire band with a large discography all its own. Saying you've left me wanting more is possibly the understatement of the century.

So, if i'm going to sniff the wine like i often do (that's a tangential Starlight Mints reference, because "i was tired of lying" is basically my catchphrase at this point), then we have a robust and complex bouquet to dissect. Allan is very much his own dominant flavor, but the hints of Pavement, Sonic Youth, and Jack White jump out at you from every alleyway you walk past. Not in a terrifying way, more like "hey what's up? Have a nice day!"

Please understand, this is not a slight to Marian Nunez at all, but Barb and Allen's voices are truly magical together, especially when they do the occasional Starlight Mints song. Here it's a lovely expansion of Matador into (let's just say it) a Lennon-McCartney-esque mash up (and the video is amazing, to boot.)

I've raved about it in all sorts of convoluted ways, but i do have one negative criticism. It's not that big of a deal, and it's really not anything to do with the band or the music or even Wes Sharon. The mix is gorgeous, the overall shimmer and vibrancy and tone are radiant, but, and this is only because i constantly switch between new and old media across 6 decades of recording technology, i have two things that bug me. It's only me, 95% of people wouldn't care at all, so don't be upset, but i have 2 points.

First, the coding of the CD crashes 6 of the 7 media players i have installed on my Linux machine (and i can put others in right after the crash and they play fine). No clue who did the actual data burning, and no this is not unique to this CD in any way shape or form. Something has changed over the last 5 or 6 years in terms of proprietary encoding algorithms and only thousand dollar an hour patent lawyers know what it is. Second, it's Rick Rubin Loud, so drop your volume to below 70% and raise it back up to taste. Those are super fussy criticisms, but i have to include them for the sake of honesty. If you're not switching between 60s/70s/2010s vinyl and 90s/00s/2020s CDs 6 or 20 times a day, you will not even notice in the slightest, and i sound exactly like the curmudgeon i pretend to be for these reviews. As consolation, i'm totally over my longstanding dislike of digipak cases, so that's something.

Final verdict, i took the liberty of listing this new recording on Discogs because i'm a sucker for database entry error messages (hope you don't mind), and i humbly request every single reader to please check out all 3 doubleVee albums (i'm not convinced Songs For Birds And Bats is an EP not an album, for reasons), because my goodness they're kooky and fun. Even if i weren't totally biased i'd recommend checking out this album for the orchestration alone, Treat Her Strangely is a phenomenal album from people i'd even be willing to go back to Oklahoma to hug. That's an elite club of awesome, even if i do say so in my "full of myself" voice ;)

Popular posts from this blog 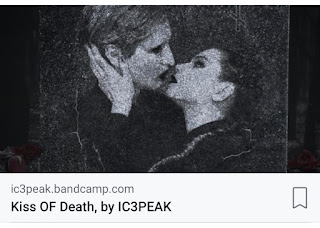 [Terrible Arnold Schwarzenegger impression] Who are these lunatics, and what do they do?  Hello, IC3PEAK, you're the current best-selling Industrial band at the moment I'm writing this. Is Kiss OF Death (sic) any good? Do Boris and Natasha, sorry Nick and Nastya, have a doozy of an "audio terror futuristic opera" in their pockets, or are they just happy to not be invading Ukraine right now. That was uncalled for, let's give this "electronic, experimental, electronic, industrial, noise, pop, punk, Russia" album the full listen it deserves.  Http://ic3peak.bandcamp.com/album/kiss-of-death   AAAAAAAGHHHHRRRUFFLLLEECHH! It gets a lot better after 30 seconds, but that first part is a little too much like Grimes for my taste. 1:10 does it again. This is Birthday Massacre type Beauty/Beast stuff, but it's only the first track, so we have to give it some room to breathe.  Oh look, a Bring Me the Horizon collab on track two, and there's Madam Grimes herse
Read more

Tears for Fears - The Tipping Point 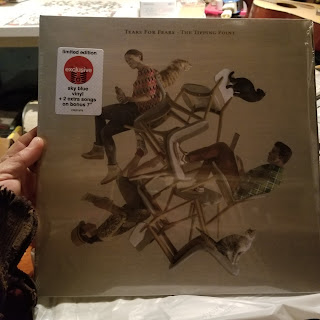 Tears for Fears released an album today; it's called The Tipping Point. I'm the king of wishful thinking, it might be good. No, wait, that's Stabbing Westward. No, that's not right either. Head Left? Oh right, Go West. Ok, now that's straightened out. It's been about 18 years since their last one so who knows what to expect. Still, people are people... no, that's the ala mode guys. Man, 42 hit me hard.  Ok, Tears for Fears, which one were they? Shout, Head Over Heels, Sowing the Seeds of Love, Everybody Wants to Rule the World. No that's definitely not true. I don't want to rule the world, for one. Ben Burnley, for two, doesn't want to rule the world, he just wants to leave it colder. It's 9-degrees right now, so that's appropriate.  I guess Curt got frustrated halfway through and told Roland to "do it if you want but leave me out." Roland's wife died in 2017, he said the last album was their last album, so i guess they talk
Read more

p(nmi)t
I'm a musician. I make noise, and I don't plan to stop. You can help support my music/art by giving to paypal.me/pnmit or downloading music from paultompkins.bandcamp.com